The Hour of Meeting Evil Spirits: An Encyclopedia of Mononoke and Magic 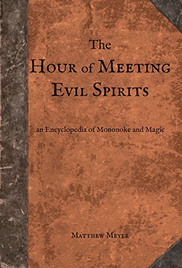 In Japan, it is said that there are 8 million kami. These spirits encompass every kind of supernatural creature; from malign to monstrous, demonic to divine, and everything in between. Most of them seem strange and scary—even evil—from a human perspective. They are known by myriad names: bakemono, chimimoryo, mamono, mononoke, obake, oni, and yokai.

Yokai live in a world that parallels our own. Their lives resemble ours in many ways. They have societies and rivalries. They eat, sing, dance, play, fight, compete, and even wage war. Normally, we keep to our world and they keep to theirs. However, there are times and places where the boundaries between the worlds thin, and crossing over is possible.

The twilight hour—the border between daylight and darkness—is when the boundary between worlds is at its thinnest. Twilight is the easiest time for yokai to cross into this world, or for humans to accidentally cross into theirs. Our world is still awake and active, but the world of the supernatural is beginning to stir. Superstition tells people to return to their villages and stay inside when the sun sets in order to avoid running into demons. This is why in Japanese the twilight hour is called omagatoki: "the hour of meeting evil spirits."

This encyclopedia contains over 125 illustrated entries detailing the monsters of Japanese folklore and the myths and magic surrounding them.

This book was first funded on Kickstarter in 2013.